All Hot Springs in Southern California in Firebaugh 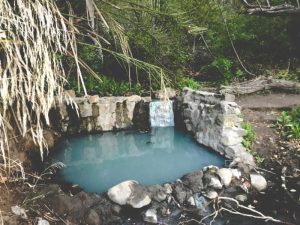 California is the third-largest state when it comes to “soakable” natural hot pools. The southern portion of the state has significantly more places to enjoy a hot soak than the north. The southern California border is located east of the states of Nevada and Arizona, to the south by the international border of the United States and Mexico and to the west by the Pacific Ocean.

There is no official definition for the northern boundary of southern California, but most include all the land south of the Sierra Nevada Mountains and the Tehachapi Mountains. To simplify navigation, we have set southern California beginning at San Fransisco drawing a straight line across the state to Nevada. This portion of California has the highest population density areas of the state which include San Jose, San Fransisco, Los Angelos and San Diego clocking in at approximately 7 million people, not to mention the "smaller" cities around them.

Southern California is home to Yosemite, Death Valley and Joshua Tree National Parks. You will also find Sierra, Sequoia, Los Padres and San Bernadino National forests along with a smattering of wilderness and preserves. Not too mention spectacular hot soaks like Deep Creek which requires a long hike and the ultra cush Sycamore Mineral Springs Resort and Spa.

Leave No Trace
Please remember that if you pack it in, pack it out. It is our responsibility to keep these extraordinary places around for future generations.

The natural hot springs listed below feature directions, descriptions, pool conditions, ratings, reviews, photos, videos and facility information and include if they are clothing optional, RV/ pet-friendly and have seasonal access restrictions.

No Soap or Shampoo!

Public hot springs in California are not bathing facilities and do not have ‘plumbing’ like that of commercial, improved hot springs.

It is important to remember when visiting hot springs in California or any state to leave them in better shape than when you arrived.

Please leave no trace, bring no glass and embrace the experience.

We recommend cleaning up the area and hot springs before soaking as it makes for a more natural experience and reward for your stewardship efforts.

Change Location
To find awesome listings near you!